Success at Northumbria In Bloom Awards 2021

There was great success for the Seaton Valley In Bloom groups at the Northumbria In Bloom Awards Ceremony held in Gateshead on the 29 September.

The groups have worked hard throughout 2021 to get their displays blooming for the judging that took place over the summer.   Their hard work and imagination paid off with the groups achieving awards in various categories in the competition.

In the Large Village category, Holywell In Bloom were overall Best in Class winners and also received a Gold award.  Seghill In Bloom received a Bronze award in the same category.

Seaton Delaval In Bloom received a Silver Gilt for the Village Centre in the special entry category of Town centre retail areas and business improvement districts.

New Hartley In Bloom received an ‘In your Neighbourhood’ Level 5 Outstanding award for the Hester Colliery Memorial Garden.

And Holywell In Bloom received a Special Award of Silver for the In Bloom Orchard at the top of Holywell Dene in the village.

We would like to congratulate all of the groups on their success in the competition this year and thank the NCC Local Service Partnership Team for their continued support to the groups.

Photos from the awards ceremony are below.  Photographs © Lee Dobson 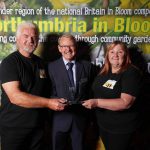 Holywell In Bloom - Best in Class winners for Large Village 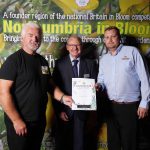 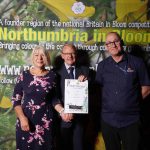 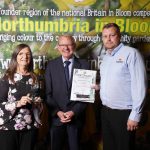 Seaton Delaval In Bloom - Silver Gilt for the Village Centre 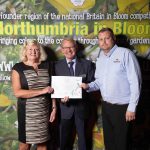 New Hartley In Bloom - ‘In your Neighbourhood’ Level 5 Outstanding award

Some examples of the work that the village In Bloom groups have been doing during the summer. 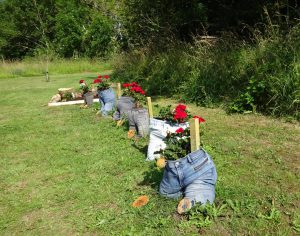 The Holywell In Bloom group have been working in the Community Orchard at the top of Holywell Dene, beside Sandown Close.  Over the recent years the group have planted a number of fruit trees in the area and have cut back the grass to make the orchard accessible to the community.

The  group have started an Orchard Club with children and their families getting involved in the orchard and learning about plants and nature.

The young gardeners at the club have been involved in lots of fun activities and recently planted some of their old pants with flowers along the top of the orchard. 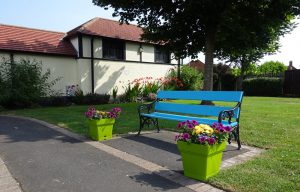 The new In Bloom group in Seaton Delaval have been concentrating their work in the Cat Park next to the Co-Op store and Avenue Head roundabout.

The group have painted the two benches in the park a bright blue and have planted up contrasting pots next to the benches with flowers. 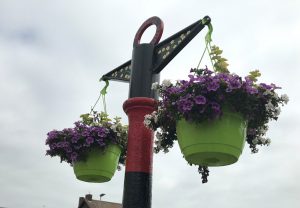 Seghill In Bloom group have been maintaining flower beds and planting up containers around the village.

They have supported the Rugby and Football Clubs and helped install some raised planters near to the club house on the Welfare Recreation Ground. 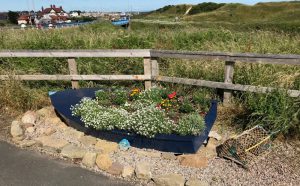 Seaton Sluice In Bloom group have maintained their floral planting along Beresford Road and in the Memorial Park.

The group have also planted up planters around the village and two feature areas of planting in boats around the harbour area.

In New Hartley the group have been working on the flower beds at the Hartley Pit Memorial Gardens and have planted a number of new shrubs and flowers and added some new features to the gardens.

If you are interested in joining one of the village In Bloom Groups, their contact details can be found below:

Seaton Valley Council works with our communities to help in entering them into Northumbria in Bloom’s Small Town and Large Village Award Categories each year.

Northumbria in Bloom began in 1964.  The region covers the area from Berwick in the North down to Cleveland in the south and west to Greenhead.

It is a community gardening competition designed to bring cheer to the country.

All of the judges are volunteers and come from a variety of horticultural backgrounds.

Northumbria in Bloom is part of the RHS Britain in Bloom campaign.  They run an annual nationwide gardening competition that involves cities, towns and villages.

If you have any questions about the services provided by Seaton Valley Council, please don't hesitate to contact us.